Manhasset finished 5-3 in the Nassau Conference III football regular season, and were ranked fifth in postseason play. It was an improvement from last season’s 2-6 record. Three of this year’s losses were by a touchdown or less.

“Was this the kind of season you were expecting from this group?” coach Jay Iaquinta was asked.

“They exceeded my expectations only because we didn’t have big numbers” he replied. “And we were so very young. So if you told me at the beginning of the season that we would go 5 and 3 and get to the playoffs, and really be competitive in every game but the Plainedge game, and go into overtime against Bethpage, I think I would have been a little surprised, yeah.”

Asked about the rout at the hands of eventual county III champion Plainedge, he said, “What they did to us they did to everybody [in the league].”

He watched Plainedge’s 33-7 loss to Suffolk champion Sayville in the Long Island Class III championship game, and said Sayville jumped off to an early lead and he believed Plainedge just was not used to playing catch up.

“It kind of threw them off a little bit,” he reflected. “Sayville was the better team, but I think if they played a couple of times, the score would be a lot closer.”

Regarding the 26-18 playoff loss to fourth seed Carey, he said, “We played hard and we actually played well. The difference is we gave up two big touchdown passes. And when you are close to an opponent, you have to make them earn everything they get. We messed up a little bit on our coverage, but other than that, we were right there.”

The playoff game featured Manhasset marching 80 yards for a score on the opening drive.

“We moved the ball well. I thought we played pretty good defense. [We allowed] two big plays, and good teams don’t give up two,” he said. “We couldn’t overcome two.”

Two players made All-County. Senior Matt Gargiulo was part of the elite for a second straight year, and started at quarterback and strong safety for the Indians. Junior Jack Mulholland was tapped as linebacker pick as the team’s leading tackler, and was called by Iaquinta, “an excellent offensive lineman.” Due to injuries, he was switched to fullback and produced there for the squad.

Cargiulo completed 25 of 51 passes for 420 yards and five TDs. He also ran for 464 yards and 13 touchdowns. Mulholland scored five TDs and also rushed for 274 yards. He recorded 13 tackles in a win over Roosevelt.

Iaquinta called the latter “[our] surprise player. He’s lightning quick and he was our leading rusher and averaged [about] 12 yards per carry. And he was forced to play as starter on defense for us.”

Heathington rushed for 495 yards and scored twice, adding a two-point conversion. His top game came against Valley Stream North, when he gained 160 yards on just 11 carries.

Ryan Tintle guided Manhasset to two late-season wins when Gargiulo went down with an ankle injury and the county football coaches named him to their “Unsung Heroes” squad. He also scored two receiving touchdowns.

“He held the fort,” praised Iaquinta, noting that Tintle was asked to step up to a skill position without any prior experience. “He jumped in and managed the offense and actually exceeded what any other normal kid would have done. He was a big pleasant surprise. We needed those wins against Glen Cove and Valley Stream North to make the playoffs, and he deserves a lot of the credit.”

Also cited by the coach were junior defensive lineman Chase Woodson, fourth on the team in tackles, and junior running back/defensive back Eddie Farkouh, up from the jayvee. Farkouh contributed 389 rushing yards and added two rushing and one receiving touchdowns.

“Matt Cargiulo was a real good leader for a young group of kids, because we didn’t have that many seniors,” summed up the veteran coach, who gained his 200th win this season. “We have nine starters back on offense and seven back on defense. So the future is definitely bright.”

Iaquinta named Drew Schwartz as a front runner to replace Cargiulo. Of the jayvee starting quarterback he said, “He’s very coachable and did a nice job of running the option offense on jayvee.”

“Drew’s been to four sessions already,” Iaquinta related. “He’s very into it and Jay Fiedler is a tremendous teacher. I watched him work with Matt, and he’s doing wonders already with Drew, [who’s] progressed tremendously.” 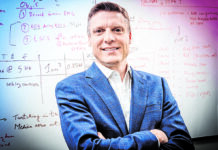