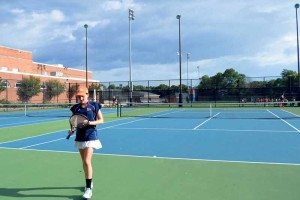 The Manhasset girls’ tennis team may have a target on their back after earning their champion status last year, but a home opener win against Syosset proved that they remain unfazed. On Wednesday, Sept. 7, the girls finished with a 6-1 victory over the Syosset Braves.

In the 2015 season, the team went undefeated in Conference I, the highest and most difficult conference in Nassau County, and did not disappoint when they went on to win the Nassau County Championships. The bar was certainly set high last year, but Coach Eileen Cuneo has no doubt that this year’s team will produce equally impressive results.

“I’d like to see a repeat of last season’s championship win,” said Cuneo. “We’re definitely a top hitting team, but we also have depth with so many new players coming on.”

New and returning players have big shoes to fill, as last year six players from Manhasset were selected to enter the All County Tournament, the highest number of girls in the county from one team. Amanda Foo and Lia Frankis also received All State honors. 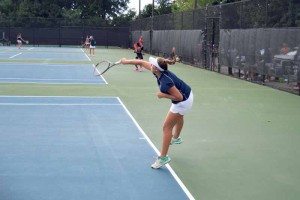 Despite a loss of nine seniors from last year, seven of which held starting positions, the team still boasts a heavy upperclassmen roster, with 11 seniors out of a 17-person team. Cuneo is counting on both her junior and senior captains to lead the team and keep the girls motivated throughout the season.

Senior captains Kyleigh Harmon and Lia Frankis are just two of the team’s top players to keep an eye on. Other power players include junior captain Maddie Clinton, who did not play last year but is returning to the team stronger than ever, and fellow junior captain Brianna Rienze, who has been a devoted varsity player since her freshman year.

As usual, the most challenging teams the Indians will face are Roslyn and Friends Academy. They will also have the added difficulty of going up against Cold Spring Harbor, a team new to the conference this year. Cuneo expects that Cold Spring Harbor will put up a bold fight, as Manhasset defeated the team in the Nassau County Championship game last year to extend their 17-0 record.

Cuneo is confident that the girls have both the ability and willpower to unite as a team and outmatch anyone standing in their path toward championships. 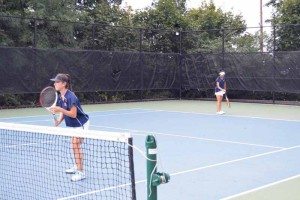 “People look at tennis as being an individual sport, but it really is a team sport,” said Cuneo. “It’s a collaborative effort, so staying together and maintaining that level of commitment all the way through the line up will be very important.”

Column: We Listened And Now We Need To Pass The HEROES...