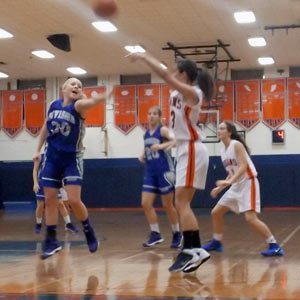 All games are important, but league games between two undefeated teams feature a bit more sizzle. In a matchup of two potent offenses, it was the Division Blue Dragons who came out victorious with a 62-39 victory over the Indians of Manhasset. The win took the Blue Dragons to 6-0 and propeled them atop the 6-1 Indians.

“I’m not going to say it was a statement win but I am very happy with it,” said Division’s Head Coach Steve Kissane, who watched his team outscore the opponent 44-25 in the final three quarters.

The Indians hung tough in the early part of the game. The first quarter featured aggressive play on both sides, leading to several steals and errant passes. The Indians held a 12-7 lead after Jackie Albanese drained a three-point field goal for her fifth point of the game. It was looking like the Indians might have too much fire power to be held down.

From that point on, the Blue Dragons began playing tremendous defense led by Erica Bleimeyer, Kristen Aquila, and the rest of the squad. They began forcing the Indians into many turnovers which created fast-break scoring. The game turned around on a three-pointer by Kristin Aquila which put the Blue Dragons up 16-14. They never looked back.

In the second quarter, and especially the second half, the two biggest difference makers were Jessica Fressle and Kristin Aquila. Fressle played an incredible game, recording a double-double with 23 points and 20 rebounds. Aquila added 10 points, and her Head Coach is certainly glad to have a sophomore like her on the team.

“Aquila is only a sophomore,” said Kissane. “I think she’s as good of a shooter as Jackie Albanese, and Albanese is a heck of a shooter. By the time she’s a senior, she’ll be one of the best players around,” he added.

Albanese led the scoring for the Indians with 13 points. She is the biggest impact playmaker on the team, and it was impressive that the Blue Dragons were able to hold her to that amount considering her capability.

Another bright spot for the Indians was Julia Glynn, who connected from long-range three times to compile her nine points.

Unfortunately for the Indians, they were not able to mount a comeback in the second half. They have played terrific basketball all season, and it is certainly acceptable to have an off-night, especially against an equally talented opponent.

“They’re a very good team,” said Kissane. “Their shots weren’t falling in tonight but on another night this could’ve been a very different game,” he added.

The Indians will head to Lawrence on Thursday to continue their season and make their playoff push. 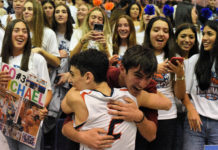 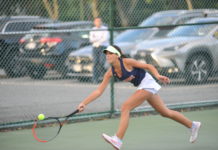 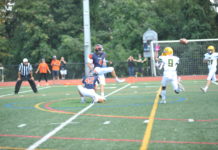