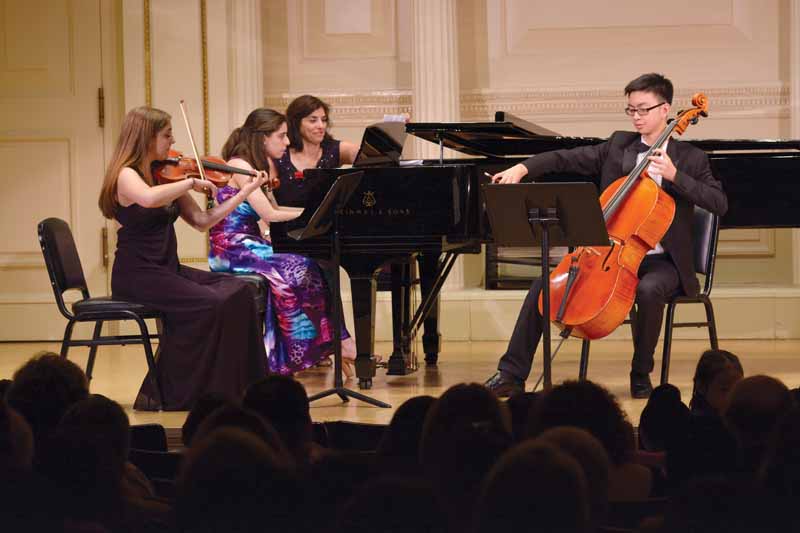 Having been instilled with a love of music and a foundation of education from their parents, directors of the Music Institute of Long Island, sisters Geri and Carol Kushner, have been dedicated to the art of music and the community of Manhasset for the past 28 years.
Before opening the musical institution in 1990, Geri and Carol were teaching music to children from out of their parent’s basement.

“We would teach on one or two days and it was too much for my parents, so we decided to try and find a place to start our school somewhere else,” says Geri Kushner. “That was the impetus to move out.”

The Music Institute of Long Island offers a vast variety of musical instruction. Piano, flute, clarinet, saxophone, trumpet, trombone, violin, viola and cello are all offered as well as voice lessons. All of these instruments are taught to students from top notch instructors.

“They are all great musicians,” says Geri. “They are able to teach all levels and all ages. They’re very caring and they do it because they love it, not just because it’s a day to fill their schedule.”

The Music Institute of Long Island also offers chamber music and group classes. The institute has students perform in solo and group recitals and often sends them to music competitions where students usually come in first place, receiving great prizes.

Geri says Manhasset is the perfect type of community to have their music institution because parents are interested in so many different avenues.

“I think they want to educate their children and give them the best,” says Geri. “They want them to succeed and giving them quality music instruction does that in so many ways because it’s learning which is also discipline. We have a lot of multitalented kids and it [music] gives them a lot of self-worth and accomplishment and they feel proud about themselves.”

Most of Geri’s students go on to great colleges like the Long Island School for the Gifted, Cornell University, Harvard Law School and the University of Chicago.

Besides the top notch instructors who teach at the music institute, the Kushner sisters have an impressive background in music themselves.

Geri received her bachelor’s and master’s degree in music performance from the Aaron Copland School of Music at Queens College and Stony Brook University, respectively. She holds both New York State and New York City teacher certifications for grades kindergarten through 12th and received her Suzuki certificate from the School for Strings. She also toured Japan with the New York Philharmonic players.

Every year, the Music Institute of Long Island takes its students to communities who have less.

“We go to a couple nursing homes and we go to the cerebral palsy center,” explains Geri. “We have a couple of kids give up their day because we go to Roosevelt and perform for the clients there, one being our brother who has cerebral palsy, so that’s very close to our heart.”

Geri says that she and Carol believe in giving back to those who are less fortunate because they were raised by parents who would often tell them that if their brother can do it, so can they.

On June 25, the students at the music institute are heading to Carnegie Hall for their big recital. The institute has several recitals throughout the year and also has solo recitals for students. The Music Institute of Long Island has also won numerous awards.

“We’ve also been on television for the Festival of Trees, which is a fundraiser for cerebral palsy,” says Geri. “My sister and I donate a lot of our services. We used to play as a quartet or duo for cerebral palsy but then we started bringing in our students.”

For incoming students, there are some prerequisites. One of them is being toilet trained for students who are 3 years old.

“If they’re really young, the parent has to help out and oversee the practicing because a 3-year-old isn’t going to practice by themselves,” explains Geri. “We invite them to come and watch and be a part of the lesson. They have to have an instrument at their home too. We feel them out to see if they’re really interested or not. We love it and we want them to love it.”

To Geri, the students are like family to her and Carol.

“We love it,” she says. “The kids love it. We are family. I don’t know every student, but I know a lot of them and they come back. Some of them perform at recitals and we’re still in touch with families today.”