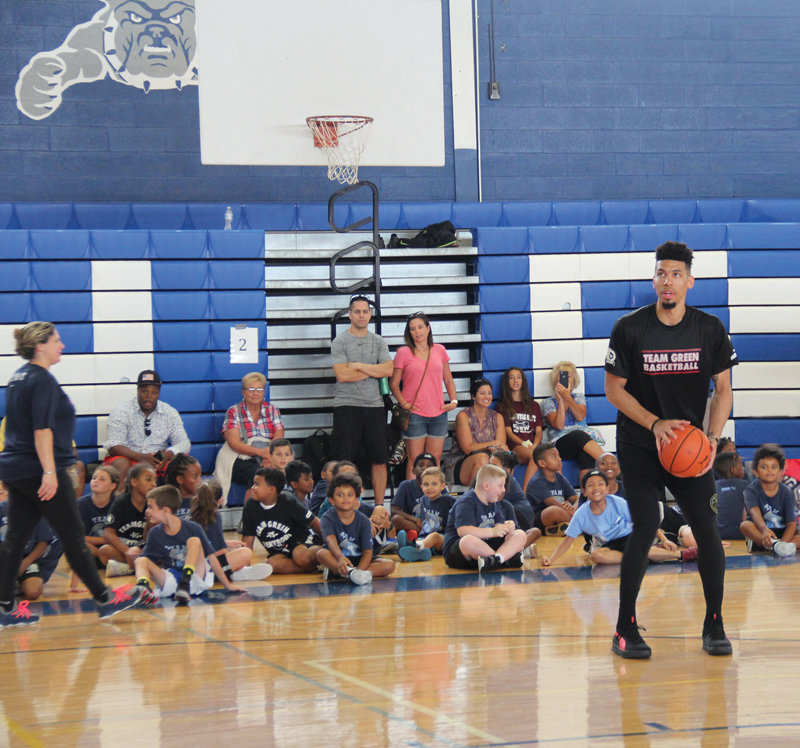 Running lengthy sprints across the court during one of his first preseason practices, Green found himself falling behind his teammates. A far cry from the lighter running drills he’d been accustomed to during his freshman year at his native North Babylon High School, coach Tim Cluess’ unwavering demand for excellence was beginning to weigh on Green.

But what came next marked a true turning point in the early stages of Green’s development. Senior Mamadou Diakite, taking notice of his fatiguing teammate, proceeded to drag Green across the finish line so he could complete the sprints in time.

Describing the moment as a “make-or-break-type time,” Green said from there on in, he knew the steeper challenge would be a mental one, rather than a physical one. “You could either quit and give up, or continue to push forward,” Green said. “Coach Cluess gets the best out of you and gets you to work and understand what it takes to push yourself through or not. Don’t let fatigue set in and be mentally tougher.”

Learning a hard lesson in mental toughness that day paid off for Green, who continued to grow throughout high school, at the University of North Carolina and now, as one of the NBA’s most prolific 3-point shooting wings. After winning his second NBA title this past season as a member of the Toronto Raptors, Green heads to Los Angeles on a reported two-year, $30 million deal, where he looks to help LeBron James and the Lakers reclaim the iconic organization’s mantle atop the NBA.

But before Green faces his next challenge, he made time amid the whirlwind of the NBA offseason to return to his hometown of North Babylon for the 10th annual Team Green Basketball Skills Camp. Green, joined by his father Danny Green Sr., brothers Rashad, Devonte and Dante, plus numerous childhood friends, worked to inspire hundreds of local kids in their own pursuit of the dream he now lives.

For Green, the trip back to the place he called home for so many years not only serves as a nostalgic reminder of the experiences that shaped his youth, but it also marks the completion of a full circle journey that began when he picked up a basketball there at the age of 2.

The person who gave him that basketball, Green Sr., has played a crucial role in every step of Green’s life and pushed him to strive for more along the way.

“He was my first coach,” Green said of his father. “He taught me the game, he got me into the game and he got me to love the game. The main reason why I played basketball was because of him.”

Setting a high bar for his sons at an early age, Green Sr. said building a half-court in the backyard and placing a bench press alongside it was just one of ways he helped Green and his brother Rashad develop their game on a court that was all their own.

“It all helps as far as what you’re trying to do if you’re setting a goal,” Green Sr. said. “Instead of having somewhere else to go, you can go right in your backyard and get the work done right there.”

Rashad, who is just 10 months younger than his older brother, said once the pair hit middle school, their work on the court became “serious” as they began playing in travel leagues and were constantly pitted against older opponents, including the full-grown men in their father’s adult basketball league each summer. But rather than shy away from the challenge, Rashad credited his father’s influence as the primary motivation to succeed.

“Dan and I, being so close, it was easy to be competitive and it was easy for me to look up to him,” Rashad said. “My pops was able to coach him more and I kind of just fell in line because he was my older brother, but a lot was his influence and just wanting to make him proud since he was such a huge basketball fan.”

Quickly growing into a “quiet leader” throughout middle school and into his freshman year at North Babylon High School, Rashad said Green energized those around him merely by “his effort, talent and skill.”

Rakeem Vanterpool, a childhood friend of Green who lived down the block in North Babylon, was one of those motivated by Green’s hard work. After they met at age 5 playing at in-house basketball and football leagues, Vanterpool said the pair played basketball together throughout middle school and ascended to the high school varsity team by eighth grade.

Still close friends today, Vanterpool said Green’s mature demeanor and genuine nature hasn’t changed since high school, something that has allowed him to succeed at the NBA level.

“What people don’t understand about Danny is he doesn’t do things that he’s not supposed to be doing,” Vanterpool said. “Meaning, if he knows he’s a shooter, he’s shooting. He doesn’t get out of his box.”

But Green’s drive to continue pushing forward would soon be tested in ninth grade after his North Babylon team suffered a crushing scrimmage loss against Cluess’ St. Mary’s squad. Not satisfied with his team’s fourth-quarter effort in the blowout win, Cluess told his players not to get changed, instead, he informed them they’d be practicing upon returning to St. Mary’s.

Green Sr., who overheard Cluess’ speech, was impressed and soon called Cluess to discuss transferring both Danny and Rashad to St. Mary’s the following school year. As the next basketball season came around, the pair found themselves waking up at 5 a.m. daily, as their father drove them to a family friend’s house in Farmingdale, who then drove the duo to Hicksville. From there, the two took the train to Manhasset and finally a bus to St. Mary’s. Rashad said the pair would then return to North Babylon around 9 or 10 p.m. each night and repeat the trip again the next day.

Now brand new to Cluess’ legendary take-no-prisoners style, Green quickly found himself being dragged across the finish line by Diakite in after-school sprints. But Cluess said it was Green’s persistence after faltering in the fitness drills that allowed him to succeed as the years went by.

“Danny fought through that, which I really liked, I saw how the kid fought,” Cluess, who will be entering his 10th year as head coach at Iona College this fall, said. “In his junior and senior year, he never lost one sprint or one suicide or one line drill, never lost one after that. It showed how much he wanted to develop.”

Calling Green “easy to coach,” Cluess said he initially played the 6’4” sophomore at center, but shifted him to the point guard position in his junior year and finally to the wing by his senior year, a position Cluess thought would be his “natural” one moving forward.

While not an “all-star kid right away,” Cluess said Green’s improvement each year allowed him to develop into the player he is today.

“Everything got better, his shot obviously improved a lot, his court decisions, his ball handling, his passing,” Cluess said. “He was always a talented defensive player and had really good timing on blocking shots. I think he learned how to push himself a lot harder and to expect a lot more out of himself.”

Spending many summers in Manhasset, Rashad said his older brother and he would also help run Cluess’ basketball camp and then came back for practice later in the day after a lunch stop at Villa Milano on Plandome Road, a place they frequented often.

The hard work and grueling hours Green put in during his time at St. Mary’s paid off, and by his senior year in the 2004-05 season, the team had a 25-1 record to pair with his McDonald’s All-American selection. Looking back on that team, Green said he was surrounded by a group of great players who fostered an environment to help him develop.

While he was in high school, Green also played on the AAU travel circuit alongside future NBA players Joakim Noah and Charlie Villanueva for coach Gregg “Chuck” Vance. Based out of New York, Vance led the Long Island Panthers to victory in the iS8 Tournament and traveled across the country with them to win the Adidas 3 Stripes National Championship.
Vance, who has maintained his strong relationship with Green over the years, also works at the Team Green Camp each summer. Reminiscing about Green’s AAU days, Vance said Green was “one of the best guys we had,” and pointed to his work ethic and attitude as major factors in the team’s success during those runs.

It’s this same demeanor and maturity that Rashad cited as one of the main reasons his older brother continued to improve in college and allowed him to find success in the NBA.

“I saw him come off North Carolina’s bench behind five other guys and he’s the only guy left in the league now,” Rashad, who would go on to play at the University of San Francisco after graduating from St. Mary’s, said. “At the time, I didn’t realize how special it was. But looking back, I’m now able to recognize that he’s doing something really, really special.”

Even with the time constraints that come with playing in the NBA, a now accomplished Green continues to come back to Long Island each summer. Green has hosted 11 camps over the last 10 summers on Long Island, including one at St. Mary’s. This year, the camp was held at North Babylon High School for kids of all ages. Green said returning home each year gives him an opportunity to both connect with the local youth and catch up with friends and family.

“It’s very important to come back to where you came from and try to help the kids from your area and give them the resources to be successful,” Green said. “Being with all of my friends and family, to be with them and build something, and also have something here for us to share, reminisce and do something we never saw ourselves doing when we were kids has been special.”

Just as Green remembers overcoming the struggles and challenges he’s faced through the years, he continues to give back and inspire those from the same place that gave him his start.