The weekend started off bright and sunny when the 2006 Columbia Aircraft LC41 left Farmingdale’s Republic Airport on Saturday at 9:30 a.m. carrying Manhasset super couple Dr. L. Michael Graver and real estate professional Jodi Cohen, with Graver piloting the plane. They were off to rendezvous with Graver’s son Adam and his wife at a medical conference in Boston, MA. A flight plan was filed with Hanscom Air Force Base in Bedford, MA, as the final destination, according to the FAA. But the small plane never made it, crashing in uninhabited woods behind a home in Woburn, MA.

“They shut the road down in front of us. It shook the house like a bomb went off,” said John Millen, a neighbor close by who was on the scene before first responders. “Days before we had a catastrophic gas line explosion that affected thousands of homes so we thought, ‘oh [expletive deleted], not again.’” 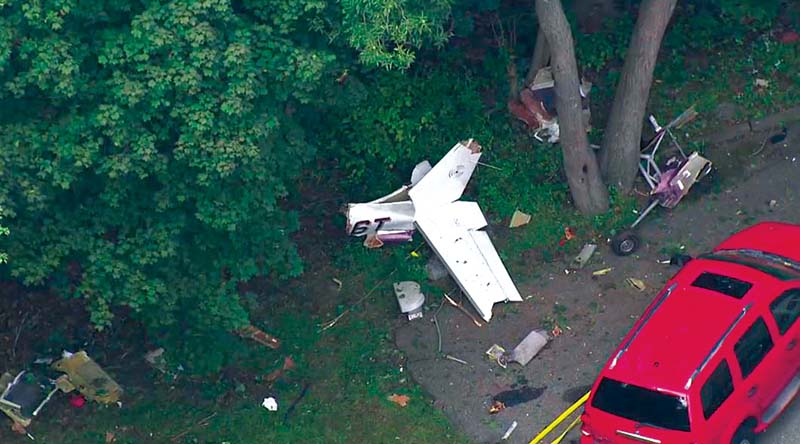 Donna Landino, a local resident, was about 500 feet away when the accident occurred.

“It was around 11 in the morning when there was a huge bang and the house shook,” said Landino. “It took all of us a few seconds to realize what happened because the houses are covered with trees and we did not see the smoke right away. When we realized it was a plane I called 911 and then ran over. There was just a little fire and lots of smoke. First responders were there within a few minutes. It was a miracle that nobody on the ground was hit. Literally that red car was just a few feet away from the wing. We are crediting the pilot that we on land are safe. Our hearts go out to the family.”

The investigation by the National Transportation Board has begun and will include a review of the pilot’s record and the plane’s maintenance to determine what caused the accident. FAA records show that Graver was issued a private pilot certificate in 2014 and was considered an experienced pilot.

Graver was the chief of adult cardiac surgery at Northwell. His career began at LI Jewish, after his residency at St. Luke’s Roosevelt in Manhattan and Beth Israel in Boston, MA. He recently moved over to the Sandra Atlas Bass Hospital and was attending cardiovascular surgeon and the Chief of Adult Cardiac Surgery—he has been part of Northwell his entire career.

“Dr. Graver was an outstanding surgeon, and had among the best outcomes in New York state out of any surgeon,” said Dr. David Brody, vice president of the cardiothoracic service line at Northwell Health. “He was one of only four cardiothorasic surgeons in the state to earn the prestigious double asterisk award, which signifies a statistically significant lower risk adjusted mortality rate. It’s a very prestigious award. Dr. Graver had awards like that in years past, here with the Castle Connelly Doctor’s award many times in his career.”

Cohen, a Certified Public Accountant, was a successful real estate agent with Douglas Elliman in Manhasset. She grew up in North Woodmere and attended Adelphi University and University of Florida. She married Graver in 2010 and the couple would have celebrated their eighth anniversary on Sept. 26.

“Jodi was a respected colleague of ours who was a top agent out of our Manhasset office,” said Ann Conroy, president of the Long Island division of Douglas Elliman.

“There is something so eerie when human life is abruptly taken away at a moment’s notice,” said Ed D’Ambrosio, senior executive manager of sales. “It’s sudden and it’s final. Jodi was taken away from us and it makes us feel so empty and sad.”

“I was driving and a text came through my car telling me Jodi Cohen, a colleague of mine, and her husband Dr. Michael Graver were in a plane crash and were killed,” said Matthew Donno, a colleague at Douglas Elliman. “It was such a shock I pulled over to reread it. When you talk to someone Friday and they are gone Saturday, no words can express my shock. Jodi was an amazing agent, colleague and friend.”

Hundreds of mourners turned out for the funeral service for Cohen and Graver that was held on Sept. 18, at Temple Judea. Douglas Elliman closed their Manhasset office in deference to their colleague. In lieu of flowers, donations in Dr. Graver’s memory may be made to the Sandra Atlas Bass Heart Hospital, c/o Northwell Health Foundation, 2000 Marcus Ave., New Hyde Park, NY 11042.

—With Additional Reporting by Andrea Bilton and Steve Mosco