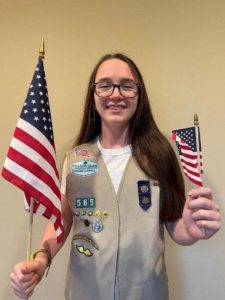 My name is Kelly Clarke and I am an 8th grader in Manhasset Middle School.  I am a Manhasset Girl Scout in Troop 556 and I have chosen teaching Flag Etiquette for my Girl Scout Silver Award project.

I have been a Girl Scout since kindergarten and have enjoyed being a scout all these years.  In 2018, I decided to join the American Legion Auxiliary because my Grandfather served in the Korean War and I wanted to support Veteran causes.  In the Auxiliary, I recently was elected the Sergeant-at-Arms.  A Sergeant-at-Arms is the person who helps set up the meeting room and handles all parts of the meeting in regard to flags.  After teaching me a little bit about flag etiquette, my sponsor, Mrs. Patricia O’Brien, the Auxiliary President, recommended I reach out to get further training from the Sergeant-at-Arms of the American Legion, Mr. Thomas Buzzitta.  I was very fortunate to have spent time with Mr. Buzzitta who was a Veteran from the Vietnam War time period.

Mr. Buzzitta shared much information in the time we spent together.  We met at the Legion Hall in Manhasset on March 13, 2021.

We discussed how to lower and raise a flag, how to not allow a flag to touch the ground, and what it means when a flag is at half-staff.  On the day I went to the Legion, Mr. Buzzitta had me raise the flag up from half-staff to full-staff because the 1-week period of time from the 500,000th Covid-19 death was over.  I also was able to put a brand-new POW/MIA flag on the flagpole.  The POW/MIA flag is used to remember those service members who were listed as prisoners of war, missing in action, or unaccounted for in America’s past wars.  Mr. Buzzitta explained the meaning of the flag’s design.  It is a man beside a guard tower with barbed wire fence to symbolize someone imprisoned.  It has the phrase “You Are Not Forgotten” on it.  We fly this flag to honor their tremendous sacrifice and devotion to our nation.

We ended the conversation outdoors by discussing the need to properly light flags and how it is best to use all-weather flags because they last longer.  It is always best when flags are raised in the early morning, preferably at sunrise, and lowered at dusk or just before dark.  He explained that taking your flag down in the rain and in poor weather is not only respectful but will prolong the life of your flag.

Next, we headed to the flag mailbox in front of the American Legion where you can deposit your older flags that may be faded, torn, or tattered from the wind.  It is proper etiquette to replace flags when they are no longer in good condition.  Mr. Buzzitta explained how there are very respectful ceremonies to retire a flag.  The Manhasset-Lakeville Fire Department takes their retired flags to the Bethpage Fire Academy and hosts what is known as a Flag Retirement Ceremony.  Here, flags are burned in a very honorable and dignified way to show utmost respect to the flag.  Firefighters, who often are also veterans, conduct the ceremony for the American Legion in a safe and dignified manner.  When we opened the box there were many flags inside.  He explained that, when nearing the summer months, they get a lot of flags because people decorate their homes generally starting at Memorial Day.  A fresh flag is always the best way to display our colors.

Mr. Buzzitta stopped to show me the bulletin board outside the Legion Hall with names of the members who passed away in 2021.  He talked about them and we took a moment to quietly remember them.

After touring outside, we went into the Legion to learn more about the American flag.  Mr. Buzzitta shared all kinds of things he had collected on the U.S. Flag Code.  He explained that the United States Flag Code is a federal law that sets forth guidelines for the appearances and display of the U.S. flag by private citizens.  If you wish to read the U.S. Flag Code, go to https://uscode.house.gov. 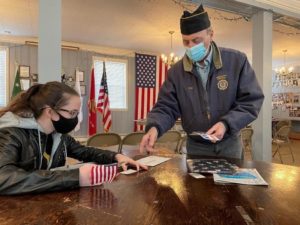 The Flag Code is a set of guidelines to follow.  Mr. Buzzitta said that as much as we want people to follow the Flag Code, it is just a guideline.  No one will get arrested or get in trouble if they don’t follow it perfectly.  It is unenforceable, but highly recommended to preserve the respect for what our flag stands for.  He talked a lot about how service members fought hard to protect our flag and that many had died trying to preserve what she stands for.

We talked about the pattern on our flag of 50 white stars on a blue background which is referred to as the union and the section of 13 alternating red and white stripes which is referred to as the canton.  The stars symbolize our 50 states and the 13 stripes symbolize our 13 original colonies.  Red stands for valor and bravery and white for purity and innocence.  Blue symbolizes vigilance, perseverance, and justice.

Some additional Flag Code guidelines I thought people should know are:

When reciting the Pledge of Allegiance to the Flag, you should stand at attention facing the flag with your right hand over your heart.  Persons in uniform should remain silent, face the flag, and render the military salute.

The flag should never touch anything beneath it, such as the ground, the floor, water, or merchandise.

The flag should never be carried flat or horizontally, but always aloft and free.

The flag should never be used as wearing apparel, bedding, or drapery.

No part of the flag should ever be used as a costume or athletic uniform.  However, a flag patch may be affixed to the uniform of military personnel, firefighters, police officers, and members of patriotic organizations.

The flag represents a living country and is itself considered a living thing.  Therefore, the lapel flag pin, being a replica, should be worn on the left lapel near the heart.

The flag should be displayed on all days, especially on:

Mother’s Day, second Sunday in May

Memorial Day (half-staff until noon), the last Monday in May

The Flag should also be displayed on other days as may be proclaimed by the President of the United States; the birthdays of States (date of admission); and on State holidays.

The flag, when carried in a procession with another flag or flags, should be either on the marching right, that is, the flag’s own right, or, if there is a line of other flags, in front of the center of that line.

When flags of two or more nations are displayed, they are to be flown from separate staffs of the same height.  The flags should be of approximately equal size.  International usage forbids the display of the flag of one nation above that of another nation in time of peace.

On Memorial Day the flag should be displayed at half-staff until noon only, then raised to the top of the staff.

By order of the President, the flag shall be flown at half-staff upon the death of principal figures of the United States Government and the Governor of a State, territory, or possession, as a mark of respect to their memory.

When a flag is used to cover a casket, it should be placed so that the union (blue with stars) is placed at the head.

When the flag of the United States is displayed from a staff projecting horizontally or at an angle from the window sill, balcony, or front of a building, the union of the flag should be placed at the peak of the staff unless the flag is at half-staff.
When the flag is suspended over a sidewalk from a rope extending from a house to a pole at the edge of the sidewalk, the flag should be hoisted out, union first, from the building.

When the flag is displayed over the middle of the street, it should be suspended vertically with the union to the north in an east and west street or to the east in a north and south street.

When used on a speaker’s platform, the flag, if displayed flat, should be displayed above and behind the speaker. 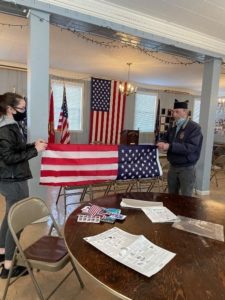 Mr. Buzzitta taught me how to properly fold the US flag.  He told me the meaning of the folds and we ended up with a neatly tucked triangle ending with the stars on the outside.

Since our meeting, I have also discovered a “flag app” that tells you the days to fly your flag as well as what days are half-staff days.

The goal of my Girl Scout Silver Award project is to teach flag etiquette to younger children.  I hope by getting my message out, I can encourage more and more members of our community to begin to display an American flag on their homes.  Spring is a great time to become more patriotic especially in time for Memorial Day.  It would be very special to me if our community could make a noticeable increase in their flag flying days, so we can let those who served in our military know that we appreciate their service to our country and honor those who died protecting our great nation. Memorial Day is on Monday, May 31st.  Please join me in a community wide effort of displaying the colors on your home.

If you need to retire your flag, please drop it off at American Legion Post 304 at 27 Bayview Avenue in Manhasset.  If you need to purchase a new flag, consider shopping locally and support a store in our town.  Here I am asking Raindew in Manhasset at 465 Plandome Road to stock up for Memorial Day.  The flags they carry are made in America. 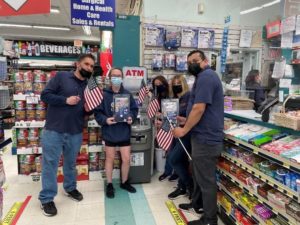 I would like to thank Mr. Tom Buzzitta, Sergeant-at-Arms for American Legion Post 304, for his service to our country and for his help in training me in flag etiquette.  I especially loved his stories about his service in the U.S. Army when he was stationed in Germany and got to travel to Italy.  I would also like to thank Mrs. Pat O’ Brien, my leader from the American Legion Auxiliary and my Girl Scout Silver Award non-profit sponsor.  She helped me develop my project and recommended that I meet with Mr. Buzzitta of the American Legion Auxiliary Post 304 in Manhasset.  If you would like to invite me to a zoom meeting with your organization to listen to a flag etiquette presentation, please contact Mrs. O’Brien at patobrien17@msn.com or call (516) 850-5702 to arrange a date.  If anyone is interested in supporting or joining the American Legion or the American Legion Auxiliary, you can learn more by visiting their respective Facebook page for the Legion, facebook.com/post304manhasset/ and the website for the Auxiliary https://manhassetala.org.

For any leader of Girl Scout Daisies, Brownies, or Juniors and Boy Scouts at the Cub level, I have patches for scouts at no cost, while supplies last, if they participate in a Zoom presentation on Flag Etiquette with me.

If interested in joining the Auxiliary Juniors, you must be under 18 years of age and have relatives with specific military dates of service.  More details are on the Auxiliary website or contact Mrs. O’Brien for questions on eligibility.  Non-member supporters and volunteers are always welcome.