Eileen Brennan, the tribune of Manhasset, died on June 7 after a brief illness. She was 90. 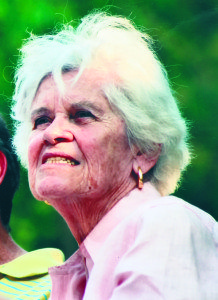 A native of The Bronx and the only child of Edward Francis and Mary (Daly) Fitzgerald, Brennan was a fixture in the Manhasset community for a good 60 years. A graduate of Manhattanville College, Brennan showed a talent in journalism right from the beginning. As a senior at that college in 1946, she won Vogue magazine’s Prix de Paris essay contest and spent the next year working for that storied magazine in Manhattan. However, family life interrupted that budding career. In 1948, she married Jack Brennan at St. Francis de Sales Church in Rockaway. In those days, Catholic bishops would instruct couples to have at least seven children. The Brennans did the bishops three better, eventually raising a family of 10 children.
In 1957, the couple moved to Manhasset. While raising her family, Brennan began a lifetime of service to the village that she quickly became attached to. Brennan was a community volunteer and activist involved, most prominently, with St. Mary’s Roman Catholic Church of Manhasset. At St. Mary’s, she served as an Eucharistic Minister, lector, blood bank coordinator and member of the parish council. She also worked with the Manhattanville Alumni Association, the AAUW and the League of Women Voters. Even while raising such a large family, Brennan found time to earn a Master of Arts in liberal studies at Manhattanville.
After all of her 10 children finished college, Brennan resumed her journalism career, where she became a fixture at Anton Community Newspapers. Joining the company in the early 1980s, Brennan edited The Port Washington Press, The Roslyn News and later, and most prominently, The Manhasset Press. Eventually, she edited up to eight papers for Anton. During her career, she also wrote book reviews for North Shore Magazine and Newsday. In 1989, she won the Press Club of Long Island Award for a series she did on power (LILCO) on Long Island. She was also named Woman of the Year by the Manhasset Chamber of Commerce.
But it was her time at Anton that Brennan made her biggest impact. The managing editors, especially Cary Seaman, always relied on Brennan’s wise counsel when it came to editing decisions. The same was true with Karl Anton, the founder of Anton Community Newspapers, who always sought Brennan’s advice on business matters, such as starting up new publications. Brennan had a number of columnists writing for her, including Bernard Kleinberg (“Bernie’s Banter”) and Don DeWitt. She also recruited columnists who ran in all of the Anton Newspapers, such as Michael D’Innocenzo and Michael Miller.
At Anton, Brennan also wrote a regular book review column. As a college graduate in an era when women did not attend such institutions in large numbers, Brennan was well-read, familiar with such masters of modernism as James Joyce and T.S. Eliot. She always loved reviewing mystery novels, which she did so by the dozens. In 1999, when David McCullough wrote his best-selling biography of John Adams, Brennan was so impressed with the book that she wrote a two-part review of it. As a book reviewer, Brennan kept up with all the latest titles, whether in fiction, poetry, history or biography. In addition to the book review and editing the voluminous Manhasset Press, Brennan also found time to work diligently on crossword puzzles. When her fellow employees got married or became parents, she was quick to buy a present for the excited young people.
Most of all, Brennan knew Manhasset inside and out. She knew and liked her neighbors. They, in turn, knew and trusted her and that made The Manhasset Press one of the top papers, year in and year out, in the vast Anton chain. As important, Brennan established a tradition of excellence at the paper, one that has been ably carried on by her successors; first, Pat Grace and now, Elizabeth Johnson, who, like Brennan, are also residents of the village.
“She was great,” said Angela Anton, publisher of Anton Media Group. “For many years, she was an indispendable part of the Anton family.”
“I learned so much from Eileen Brennan while she was editor of The Manhasset Press,” added Sheila Ferrari, a page designer who collaborated with Brennan for many years. “We had a great working relationship which was reflected in the newspaper. She will be missed by many.”
Brennan retired from Anton Community Newspapers in early 2005. That January, a crowd of family, friends and well-wishers gathered at the North Hempstead Country Club for a well-earned retirement party. The day, as noted, was attended by children, grandchildren and her many friends in the Manhasset area. Whenever needed, Brennan would return to Anton’s Mineola offices to assist the editorial staff in the summer when other editors were enjoying a vacation.
The beloved wife of the late John J. “Jack” Brennan, and loving mother of the late Eileen Ann, Brennan is survived by her children John (Joan) of Ardmore, PA; Edward (Julia) of Sea Cliff, NY; Beatrice Wall (Robert) of Lloyd Harbor, NY,;Michael (Lisa) of Manhasset; Virginia (James Waechter) of Nashville, TN; Stephen (Patricia) of Irvington, NY; Peter (Bernadette) of Bronxville, NY; Thomas of Philadelphia, PA and William (Margaret) of Yorktown Heights, NY.; 24 grandchildren; 10 great-grandchildren; her sister-in-law Beatrice Brennan, RSCJ and brother-in-law Michael F. Armstrong, as well as many loving nieces and nephews.
In Manhasset, Eileen and Jack Brennan made many beloved friends and the family knows they grieve with them now.
A wake was held at Fairchild and Sons in Manhasset last Friday, June 10. There was a Funeral Mass at St. Mary’s Roman Catholic Church on Saturday, June 11, followed by interment at Gate of Heaven Cemetery.In lieu of flowers, her family request contributions to be sent to St. Francis Hospital, in Roslyn.