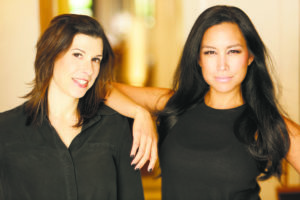 Imperfections. Everyone has them. Disco Fried authors Manhasset mom Meli Dez and her best friend Jules Morse joined together to write a book with the message that life is like a plate of disco fries covered in gravy and cheese, a delicious mess. The two authors hope readers of the 204 page book come away with a sense of empowerment and an understanding that everyone has imperfections and that is just fine.

“We’re both creatives at heart,” said Morse. “I studied English Literature and creative writing is my jam. Meli has the music. We both have this creative edge, but we weren’t able to flex the muscle in any way. We’re two creative people looking for a creative outlet, we figured let’s try this thing.”

After Morse and Dez took a trip up to Montreal, Canada to commemorate five years of friendship, the two decided the trip would serve as the perfect backdrop to a book.
“The premise of the book is two women who take a trip to Montreal Canada, and it’s not a memoir,” explained Dez. “We took that because it was an experience we had. You write about what you know, what feels familiar to you.” 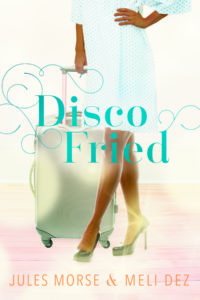 Although the two main characters Mina Baron, a talented musician who has just been diagnosed with Guillain-Barre syndrome, and her best friend Jill Stone, a writer who feels trapped by her family and schedule life, exhibit physical similarities to the authors, Disco Fried is a work of fiction. It follows the two friends on their trip to Canada as they meet new people, have surprise meetings with old flames and eat make-your-own poutine. Throughout the trip the pair explore their friendship and learn about themselves.

“They call everybody out on their content of character,” said Morse. “They’re finding the flaws in everybody including themselves. These aren’t girls who are coming out saying they’re doing things wrong and then saying they have it all together. They’re saying no one has it all together, let’s just help each other out here.”

“We wanted to share these messages with women and even men,” added Dez. “The main theme of the book is that we need to accept imperfections. It’s okay not to be the perfect mom with the perfect baby with your perfect husband. Instead of pretending everything is perfect. Admit that it’s not and work on making it better authentically.” 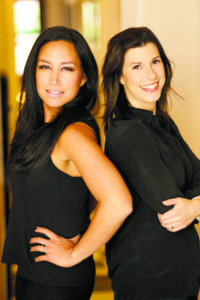 While the book‘s main idea is that everyone has imperfections, it also tackles infidelity and the struggles of being a wife, mother and friend. And because some of the book is set in Manhattan and on Long Island, Dez and Morse feel that Disco Fried reveals four major things about Long Island social life.

“Materialism has reached a whole new stratosphere,” explained Dez. “People are no longer keeping up with the Jones’s. They are trying to keep up with the Kardashians. Number two, the overall socioeconomic culture demands the portrayal of status which comes from a sense of entitlement. Number three, raising a family is survival of the fittest and parents have become so competitive with their children. Number four, people have lost touch with reality and they are aware, but they are helpless to have it any other way.”

The two friends meticulously wrote and edited Disco Fried for about two years before self-publishing the book, making sure their messages of empowerment shone through. It was released on www.amazon.com on Sept. 15 in paperback and kindle formats. For more information about Disco Fried and its authors, visit www.discofried.com.