The Osler Society of the Hofstra Northwell School of Medicine recently held its 2016-17 kick-off event, Breathe, a Tr 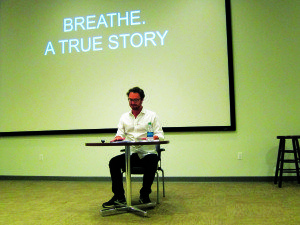 ue Story. Breathe, a theatrical presentation by actor-writer-advocate and Georgia native Brennen Reeves, is about his lifelong journey as a cystic fibrosis (CF) patient and ultimately—a double lung transplant recipient. At times both hilarious and heartbreaking, and full of irreverent humor, the creative autobiographical solo show is about one man’s quest to live beyond the odds. 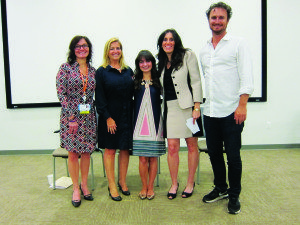 Initially diagnosed with “failure to thrive” as an infant, Reeves was eventually diagnosed with CF. He spent much of his young life dealing with therapies, tubes, tanks, and two-week-long tune-ups in hospitals multiple times each year. Finally, at the age of 15, Reeves was told that he would not live past the age of 18 if he did not get a double lung transplant. But he beat those odds, and on Feb. 21, 2011, due to the unselfish generosity of
a family who had suffered an irreplaceable loss, he got the call that a set of lungs was available and being offered to him. He was 19 years old
at the time.
Due to illness, Reeves was unable to attend the event. Instead, the show was performed at the Hofstra School of Medicine by his director and co-creator, David Lee Nelson. The performance was followed by a presentation by Joan DeCelie-Germana MD, director of the pediatric cystic fibrosis center at Cohen Children’s Medical Center, Northwell Health. DeCelie-Germana, who has been working with children with CF throughout the 26 years of her medical career, discussed what she terms her “calling” and her vision for the care center.
DeCelie-Germana explained some of the physiological aspects of CF and a number of improvements in CF treatments for pediatric patients. Her patients “age out” of the pediatric center to the adult service at age 21.
DeCelie-Germana said that it is due to advances in care and improvements in treatment that she is able to transition or “deliver” increasing numbers of her pediatric patients to the adult service with much better lung function than
in the past.
Visit www.brennenreeves.com to read more about Reeves and his journey.
Visit www.medicine.hofstra.edu or contact Lisa Martin, coordinator of the humanities in medicine program at Hofstra Northwell School of Medicine by email at Lisa.B.Martin@hofstra.edu to learn more about the Osler Society and its programs.