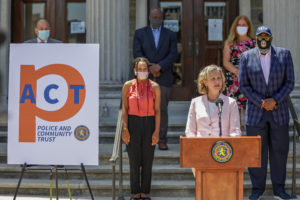 Nassau County Executive Laura Curran announced last week the formation of a new county initiative that is aimed at building trust, transparency and a working dialogue between community activists and police—the Police And Community Trust (PACT). The effort will bring together protest organizers, law enforcement and other stakeholders to listen and engage in conversations about concerns raised by the community in recent weeks given the many protests that have taken to Long Island in the wake of George Floyd’s murder.

“Instead of letting this moment divide us, we will reach across racial and generational divides to constructively address the issues being raised in our communities as one Nassau,” Curran said. “I have the utmost confidence in our residents and believe we will emerge stronger and more united if we can listen, engage with good faith and respect one another. Although recent protests have been part of a national movement, PACT will be Nassau County-centered, focusing on local issues and looking at ways for us to strengthen Nassau’s community policing model.”

“I want to thank County Executive Curran for this tremendous honor,” Prime said. “I look forward to working with the men and women of this committee, who represent all walks of life here in Nassau County. This dialogue can, will and must lead to changes in our system, so that all disaffected people can truly feel that the system is working for them, not against them.”

Prime also commended the young organizers for highlighting many inequities that exist, not just in the criminal justice system, but throughout many aspects of daily life for African Americans.

“This initiative will provide an excellent opportunity for community leaders, government officials, community activists and police officials to get together to communicate and discuss current issues in an effort to improve community/police relations,” Jackson said.
Ryder added that the PACT initiative will increase the police department’s efforts and awareness so that they can continue to grow the partnership between officers and the community.

“The Nassau County Police Department has always had excellent community relationships and this brings us one step further to our goal of enhancing our engagement even more,” Ryder said.

Baker said that as a young black woman from Nassau, she’s excited to have and push these certain types of conversations forward with others.

“This is not the time to be defensive, but instead the time for an honest and open conversation in order to break the barriers between the police and the community,” she said.

In a letter to the community, Singas said her office will partner with Maurice A. Deane School of Law at Hofstra University Law to analyze comprehensive charging and case disposition data to identify racial disparity and bias and publicly report the findings of that review as well as any corrective action warranted. Among many other initiatives, Singas’ office will seek the appointment of a special prosecutor for all new cases in which a police officer is credibly accused of criminal conduct in the course of their duties. Singas’ office will then encourage the State Legislature to codify Executive Order 147 and expand its provisions to create a special prosecutor’s office within the Office of the Attorney General to investigate those cases.

To further the strengthening bond between officers and community members, Curran recently announced that the county issued a Request for Expression of Interest (RFEI) for respondents interested in partnering with the county to design and implement a Body-Worn Camera Program for the county’s police department. The county is seeking to provide body-worn cameras to sworn personnel in the Nassau County Police Department to record enforcement and other interactions between officers and the public.

“Now more than ever, we must continue to build trust between communities and the police,” Curran said. “Nassau does community policing better than anyone else, but we always strive to do better. Body cameras have proven to be a valuable tool in promoting transparency, safety and accountability. Nassau is bringing everyone to the table to make positive, concrete change.”