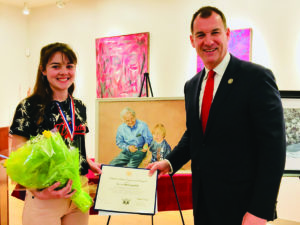 The winning artwork will be displayed in the U.S. Capitol for one year. The top three runners-up will have their submissions displayed in Congressman Suozzi’s Washington, D.C., Huntington and Queens offices. The theme for this year’s competition is: People and Places: What Makes New York’s Third Congressional District Special?
Last year’s winner was Kyra McLaughlin, from Manhasset High School. Her oil on wood painting, “Ticky-tac?” was displayed for one year in the U.S. Capitol, along with winners from congressional districts across the country.
All entries must be submitted to Congressman Suozzi’s Huntington office no later than 4 p.m. on April 1. Winners will be chosen by a panel of judges and announced at a reception with the Congressman on Saturday, April 6, from 12 to 2 p.m., at the Art League of Long Island, 107 East Deer Park Rd., Dix Hills, NY, 11746.
Specific rules, guidelines and the 2019 Student Release Form for the competition can be found at www.house.gov/educators-and-students/congressional-art-competition.
Suozzi, a strong supporter of the arts, serves as the Chairman of the Morgan Park Summer Music Festival, and included artwork as part of the historic renovations of the Glen Cove City Hall and the Nassau County Theodore Roosevelt Executive and Legislative buildings. In addition, he commissioned a painting by American artist Mort Künstler, known for his illustrative paintings of historical events, depicting George Washington’s 1776 Crossing of the Delaware River. The painting is on display at Mount Vernon.