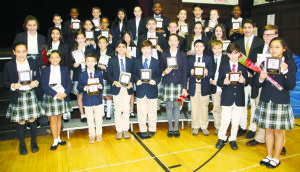 Buckley Country Day School’s student-athletes were flying high this fall, with 11 total teams competing in soccer, tennis and cross-country. The Bulldogs showed off their skills—and their sportsmanship—in a season filled with highlights. Three of the teams finished the regular season with undefeated records.

“Our teams have shown tremendous athletic growth this fall, while exhibiting sportsmanship in the process,” said Buckley Athletic Director Roney Eford. “They competed at the highest level while producing championships and undefeated teams. Most importantly, they have shown a dedication and commitment to improving their skills on a daily basis. Great job to everyone.”

Boys Soccer: The team finished undefeated in the regular season, only dropping a contest in the tournament. “The boys fought hard in every regular season game to pull out victories,” Coach Isaac Neal said. “Every day the boys came to practice ready to work hard and get better.” The Bulldogs were led by MVP Thanasi Pappas, Most Improved Player Max Brown, and Buckley Bulldog Spirit winner Alex Goldenberg.

Girls Soccer: The girls excelled on the field this season and really played together as a team. “This team was a pleasure to coach,” coach Nicole Lanzetta said. “They had a lot of passion and stuck together as a team throughout the season. They had a desire to improve and completed game plans to precision.” The Bulldogs were led by MVP Vanessa Foy, Most Improved Player Jianna Ruggiero, and Buckley Bulldog Spirit winner Charlotte Baker.

Boys Red Soccer: The Bulldogs went undefeated this season, with one tie. “The best part about the season was that everyone had a role, and stuck to their role in order to help the team,” Neal said. “The boys had fun in practice, while working hard, and this showed in games. I am very proud of their performance and sportsmanship.” The Bulldogs were led by MVP Cary Belliveau, Most Improved Player Thomas Day, and Buckley Bulldog Spirit winner Michael Marrale.

Boys Blue Soccer: The Blue squad finished the season with an impressive 4-1 record. “The boys did an incredible job working hard at practice and playing unselfish soccer during the matches,” coach Brian Boyle said. “They showed great sportsmanship throughout the season as well.” The Bulldogs were led by MVP Michael Fiechter, Most Improved Player Jason Bright, Buckley Bulldog Spirit winner Theo Tsiamtsiouris, as well as Ryan Carmody and Liam Schillinger.

Girls Soccer: The fifth and sixth grade girls soccer team enjoyed a good season, finishing with a win in their final game. They completed their 2-3 season with a 2-0 victory against Solomon Schechter. “The team improved in every game they played,” coach Christine Jenne said. “They really played as a team and I am proud of them.” The team was led by MVP Ava Nappi, Most Improved Player Allison Rosenthal, and Buckley Bulldog Spirit winner Katherine Vice.

Co-ed Cross Country: The cross-country teams came to the field enthusiastic and ready to warm up and run every day. “They all worked so hard individually and as a team,” coach Eddie Harris said. “I was very proud when they came in second place this season in every meet.” The five/six team was led by MVP Jenise Fussell, Most Improved Player Dimos Theofilaktidis, and Buckley Bulldog Spirit winner Asha Chugh Singh. The 7/8 squad was led by MVP Anna Tsioulias, Most Improved Player Lauren Deramo, and Buckley Bulldog Spirit winner Jane Park.