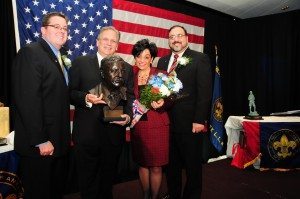 Nassau County Executive Edward P. Mangano was presented with the Distinguished Chief Scout Citizen Award at the 41st Annual Teddy Roosevelt Gala.  The Boy Scouts of America (BSA) Annual Event was held at the Crest Hollow Country Club where 200 people gathered to celebrate another successful year of scouting on Long Island.  All proceeds from the gala will benefit Scouting for the more than 10,400 youth and 3,800 adult volunteers in Nassau County.

Presenting the Chief Scout Citizen Award to County Executive Mangano is Jay Garee who serves as Scout Executive/CEO of the Theodore Roosevelt Council of BSA, and Salvatore Ciampo President.  The two scout representatives also presented Linda Mangano with a bouquet of flowers for the work she does alongside her husband at many of the scout events throughout the year.

Recently County Executive Mangano and the Museum of American Armor announced an essay challenge in conjunction with the Theodore Roosevelt Council of the Boy Scouts of America.  The essay challenge is designed to create a better understanding of the heroes within our own families and those throughout our communities with as much as $10,000 in scholarship awards to be presented to the selected winners.  Information regarding the Essay Contest will be available soon on the Museum of American Armor’s website:  http://museumofamericanarmor.org.