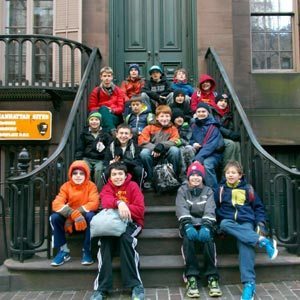 Outfitted only with comfortable footwear and an appetite for exploring, on Dec.7 about 20 Scouts from Plandome Troop 71 trekked the Big Apple on their annual urban day hike. The journey began in Roslyn on a train to Jamaica and then a hop onto the “J” train for an elevated subway “tour” through Queens and Brooklyn, a quick stop in Williamsburg at “Pigs N Thighs” to pick up emergency rations of ridiculously sized doughnuts and then at the indoor Brooklyn Flea market (a former factory), overflowing with 200 vendors and a smorgasbord of good eats, like a “Bruffin”.

A scenic trek across the Williamsburg Bridge into Manhattan provided wonderful vantage points for the New York harbor. After lunch at Whole Foods on East Houston Street, the Scouts explored Washington Square Park, enjoying a group of street performers using the fountain basin as a stage for their brand of wit and gymnastic feats, followed by a walk through the Washington Mews and the backyard of NYU, continuing to Union Square Park, with a fun stop in between at Forbidden Planet.

A highlight of the day was a visit to the National Historic Site at the home of Teddy Roosevelt’s birthplace on East 20th Street. Roosevelt, the great outdoorsman and conservationist from Oyster Bay. There, Troop parent Bob Reilly provided a fascinating lecture (to a round of applause and a hearty well earned BULLY!) encapsulating the life and times of Roosevelt and why he was one of the most influential presidents in our nation’s history, a man worthy to be depicted atop Mount Rushmore and the namesake of our local scouting council—from birth with bad eyesight to salvation from an assassins bullet by a well placed eye glass case, all of which was visible in the glass display case, along with his shirt and speech with bullets hole through them all, right in the back of the museum room!

A break for sweets at the Shake Shack at Madison Square Park energized the Scouts for the last leg of this total six-mile hike to Penn Station for the train home.