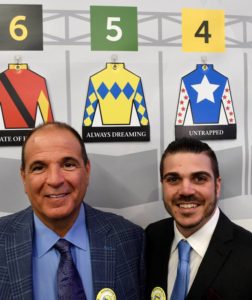 A winner of the Florida Derby, Always Dreaming started off with 9 to 2 odds. He opened with 4 to 1 odds coming out of post position 5 and surged to win with a two and three-quarters length lead. Always Dreaming brought home a $1.6 million purse.

The venue was hit with the same rain that pummeled Manhasset on Friday, which made for a muddy Churchill Downs track.

The two-minute race had the stands filled with a spirited and stylishly dressed audience with ladies appropriately coiffed with designer headdresses making this a fashion statement at this exclusive venue, attended by some Manhasset neighbors.

Manhasset resident Anthony Bonomo and childhood friend Vinnie Viola, NYC native, are the major owners of this equestrian winner. Bonomo and his wife Mary Ellen are active in the community. Their three children all attended St. Mary’s Schools in Manhasset. Bonomo, an attorney by trade, is the Chief Executive Officer at Physicians Reciprocal Insurers, Inc.

He is a strong supporter of the schools and serves as vice chairman of Hofstra University. He branched out into racing in 2006, when he purchased two horses under the banner of Brooklyn Stable Boyz. Later Viola joined in. Mary Ellen named the bay for the ambition and willingness to dream big in horse racing.

Viola and Bonomo grew up together in the Williamsburg section of Brooklyn and were first exposed to the racetrack by their fathers. The men who are both in their 50s have accomplished a lot since their childhood days. Viola made his bones on Wall Street and is the current owner of the Florida Panthers. He was President Trump’s nominee for Secretary of the Army but declined the position.

Always Dreaming, who is being ridden by champion jockey John Valezquez, is considered to be a favorite in Pimlico at the upcoming 142nd Preakness Stakes on Saturday, May 20. Let see the dream continue.