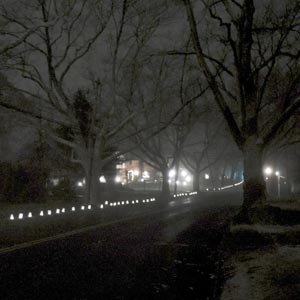 Who could have predicted a more beautiful setting that occurred at dusk on Sunday, Dec. 8 in the villages of Flower Hill and Munsey Park? With the snow gently coming down, these Manhasset villages were transformed into a Winter Wonderland reminiscent of a Thomas Kinecaid painting. Houses were adorned with beautiful Christmas lights while the roads were lined with white candle lights. Many had fires in fireplaces and were decorating Christmas trees in their homes to complete the setting. Many celebrated with friends and neighbors to stop by to witness this bucolic event.

Santa Claus came to see the festivities on top of his bright, shiny fire truck. The firetruck played Christmas carols which beckoned families to come out of their warm, houses to wave. The children were rewarded with candy canes at the site. The joy and excitement of the season cloaked the scene as a blanket of white covered lawns and roadways.

The Year Of Two Seasons: Manhasset, football champs in the spring,...

History In a Graveyard: Christ Church Manhasset to host Historic...