The Garden City Hotel was the scene of a sold-out event on July 20, when friends, family and celebrities came to the David B. Shepard Gala, A Night To Remember. 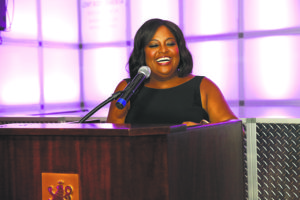 Manhasset resident and director of programming Marisa Stefatos, whose mom had succumbed to the Lewy Body Dementia (LBD), was amazed at the hundreds of items including raffles, silent auction and live auction items generously donated to the cause.

A special guest appearance was actress comedienne Sherri Shepherd, co-host of The View, whose witty repartee opened the dinner.

Often a taboo subject, but a reality for many, LBD is a disease which affects an estimated 1.4 million families in the United States. It is a type of illness that worsens over time.
Dementia is a common term used especially with the aging. Dementia is defined as a chronic or persistent disorder of the mental processes caused by brain disease or injury and marked by memory disorders, personality changes and impaired reasoning.
Lewy Body Dementia is an umbrella term for Parkinson’s disease dementia and dementia with Lewy bodies. Lewy bodies are abnormal aggregates of protein that develop inside nerve cells. They are spherical masses that displace cell components and can be found in the brainstem or the cortex.
The cause for LBD is unknown. The disease worsens over time. Symptoms may include fluctuations in alertness, visual hallucinations, slowness of movement, trouble walking and rigidity. LBD also affects autonomic body functions, such as blood pressure control, temperature regulation and bladder and bowel function. Progressively debilitating, LBD can also cause people to experience visual hallucinations or act out their dreams. Excessive movement during sleep and mood changes such as depression are common.
Susan Schneider Williams, the wife of Robin Williams, was on hand to speak passionately about LBD and about “the terrorist inside my husband’s brain.” She is dedicated to spreading awareness of this disease. She currently serves on the board of the directors of the American Brain Foundation. Each guest received a book of poems titled Lewy Body Days by Joop Bersee, who began writing the poems after he was diagnosed with dementia in February 2017. The fight that is fought with family, caregivers and health care workers is just beginning for him.
“Mr. Bersee speaks from inside a place where the surreal walls of dementia are being reinforced around him. Through his poetic courage, he allows us powerful insight into what it is like to live with this disease.” said Williams.
“There is no cure for this dreaded disease, but the symptoms can be managed,” according to Board Certified Neurology & Neurophysiologic Dr. Olga L. McAbee. The treatment addresses the hallucinations and other symptoms with a pharmaceutical regimen.
Visit the Lew Body Dementia Resource Center for more information at www.lbdrc.org.