Manhasset’s most famous road from the past to the present

Plandome” comes from the Latin words meaning “plain home,” which does not describe the eclectic shops on Plandome Road ranging from Steiner’s Bakery to Joseph’s Haircutter and Barber. Plandome Road was not always the main street it is today, but the placement of the Long Island Rail Road solidified its spot as the town’s hub.

In the early 1800s, Plandome Road was just a country lane while North Hempstead Turnpike, now Northern Boulevard, was a toll road. The original town’s main street was located in the valley at the head of the bay on Valley Road.

The old Plandome Road saw the comings and goings of many prominent Manhasset buildings including Saint Mary’s Roman Catholic Church, which was dedicated in 1857 on Plandome Road. However, the church moved to 1300 Northern Boulevard, where it still stands today. In 1868 the five room Plandome Road schoolhouse was built only to be torn down in 1914 to be replaced by a larger brick school in 1915 that was also later torn down. The brick school was replaced with the Manhasset Village Green, later to be named Mary Jane Davies Green in 1989.

The original Long Island Railroad was built in 1899 as a wooden frame building, relocating the business district of Manhasset from the “Valley” near the bay to the “Hill.” The original building was later renovated in the 1920s to the building that stands today.
Soon after the creation of the railroad, the Town of North Hempstead Town Hall was built on Plandome Road in 1907, the same year Manhasset became a permanent seat in the North Hempstead town government. Plandome Road was chosen as the site for the Town of North Hempstead Hall due to its central location in North Hempstead and its proximity to the railroad station. With the addition of the town hall and the Long Island Railroad, business flocked to Plandome, no longer making it a country lane. 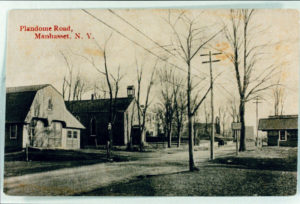 “Growth around Plandome Road was directly affected by the placement of the Long Island Railroad,” says Town of North Hempstead historian Howard Kroplick. “The businesses moved with the train station.”

Manhasset’s first library opened in a rented storefront on Plandome Road with the question of whether it should be private or public, later moving to Onderdonk Avenue in 1952 where it stands today as a public library.

Today, Plandome Road is still lined with businesses and bustling with people shopping, working or eating. Mary Jane Davies Green breaks up the busy town with its greenery, blue and white gazebo and children’s playground with water spray features. In the summer, bands play in the park, inviting residents to get together to listen to music.

Many small family businesses still thrive on Plandome Road, including town staples like the Manhasset Deli, which has switched owners a few times since it was built in the 1940s, but remains a prime spot to eat in town. The A&F Market originally built in 1957 and bought over in 2008 by a new family still supplies Manhasset with a local butcher and grocery at 393 Plandome Road. Joseph’s Haircutter and Barber, Villa Milano Pizzeria and Louie’s Diner have also been serving the Manhasset community for many years and still remain important parts of making Plandome Road what it is today.

“The road varies in style,” says local architect Frank Capone, who owns Frank J. Capone, Architects at 272 Plandome Road. “But that’s a good thing because it’s not trying to be South Hampton where everything is the same. There is freedom of design.”

Capone has worked up and down Plandome Road, modernizing Young’s Fine Wine and Spirits in 1998 and his own storefront in that same year. Capone worked on the Plandome Village Hall restoration and built the modern clock tower that stands above Plandome Road.

“There are definitely upscale businesses coming in,” says Capone. “Many of the buildings on the road have been updated, probably about 30 percent. There’s a turnover in more upscale buildings. We miss Wright Hardware which was a wonderful hardware store. There’s less retail and family owned buildings than there used to be like dry cleaners or shoemakers.”

While many family-owned businesses remain, the road is seeing an influx in corporate banks and real estate agencies with three of each type of business lining the road.

“One great thing about the road is the Memorial Day Parade that comes down it,” says Capone. “It’s a wonderful event that the fire department puts on with the Girl Scouts and the veterans. In the spring and summer we have music at Mary Jane Davies and vendors will set up tents to sell.”

With the placement of the railroad, Plandome Road was able to become the town hub that it is today lined with many long-running family-owned businesses and Mary Jane Davies Park that allows the town of Manhasset to get together in the warmer weather.