by Jen DeSena
manhasset@antonmediagroup.com
Red Ribbon Week concluded with a gripping presentation by the husband and wife team of Chris and Kathi Sullivan. He shared his perspective as a recovering addict and Kathi the horrifying detail of every parent’s nightmare: a daughter’s death from a single night of drunkenness. 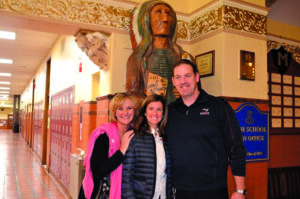 Chris Sullivan, a Boston College and pro football lineman who was a member of the Super Bowl champion New England Patriots, related calmly his descent into the dark spiral of addiction to painkillers and heroin, prompted by his social anxiety and frank unawareness of the ease with which even strong personalities and over-achievers can become addicted. Kathi Sullivan, with the warm welcoming way of a mother leaning with her shoulder against the fridge, spoke in emotion-laden terms of the mistake-plagued last evening of her daughter’s life, one that ended with her inebriated 17-year-old stumbling away from a campfire of 22 friends to die alone, after having forded two rivers, drowning in just two feet of swamp water. The Sullivan couple, who typically speak together in New England, made the sojourn to Manhasset at the behest of Manhasset parent and CASA volunteer Missy Leder, a cousin of Sullivan.
Sullivan began his address by pointing out how fortunate he was in his youth and how indeed once sat in an audience similar to the Manhasset listeners in attendance; but when he did so, he just couldn’t relate. Sullivan believed in high school and throughout college that he was “never that guy.” “I saw these people speaking of their addictions and I thought they must be weak — they had no willpower. I looked at them and thought I could never become that person.” Sullivan described his suburban Massachusetts upbringing and characterized his home and family life through high school as only supportive. He was captain of the football, track and basketball teams while in high school, before moving onto Boston College, where he started 48 games before being drafted as a fourth-round pick for the Patriots.
Significantly, Sullivan suffered from an unspoken social anxiety and untreated depression through his college and young adult years that left him feeling vulnerable in social settings and around his teammates — and when facing an injury in the setting of a new team, the Pittsburgh Steelers, and “looking to fit in with a new crowd,” Sullivan started drinking more than he ever had. Sullivan remarked that “my anxiety got so bad during the day and I had no coping skills. I thought only weak people ask for help.”
After injuring his back, Sullivan used Percocet to push himself through pain and he found that the drug’s high also eased the social anxiety he had always known. After being released by the Steelers, and despite his addiction to painkillers and heroin, the New England Patriots gave him another chance and he rejoined the team for a year in which Bill Belichick and Tom Brady led the team to a Super Bowl championship. While his team celebrated the win on the field under confetti, he retreated to his dark hotel room to take his pills. The night he received his Super Bowl ring, he crashed his car and was arrested for DUI, and never returned to the team. Sullivan’s addiction resulted in him losing everything with eight arrests and five DUIs, and lost all of the $6 million he earned playing for the NFL. Sullivan passed his Super Bowl ring throughout the audience at the MHS auditorium for all to see and touch, a ring he never wears. He went through 15 rehabs seeking sobriety and was down to 150 pounds. In December 2008, two days after his mother stood over his bed begging God to take his life as she did not want him to suffer anymore he finally received the “gift of desperation” and has been sober since.
Kathi Meyer Sullivan’s account was not a first person tale of affliction but rather a parent’s determined re-telling of the last day of her daughter Taylor’s life—a girl who “would light up a room with a very strong personality.” The last time the single mother of three saw Taylor, 17 years old, she was dressed in all green in celebration of spirit week at her high school in October 2008. Later that afternoon and into the evening, the teen chose to drink excessively with friends and while numerous adults and friends witnessed her intoxication no one called Kathi. “As parents, we need to always make that phone call to check on our children, and as friends, if we see [or hear] something wrong, we need to let a parent know,” she said.
As Taylor stumbled to leave the gathering in the woods her friends laughed and her body was found three days later. Kathi stressed that young people need to take care of their friends, and look out for them, so that tragedies like Taylor’s don’t continue to happen. Sullivan emphasized how friends need to “look out for a friend,” or “make a better decision”.
Kathi met future husband Chris Sullivan at the very first parent talk she held after her daughter died. Although Chris wasn’t a parent himself, he attended the talk because he was five weeks sober. The couple married in January 2011, and they have been sharing their stories with high school students and community members for the last seven years.
Kathi concluded by asking each member of the audience to picture their best friend or their sibling not sitting next to them and their parents telling the story of their lives all because of just one night of reckless decision making.
Audience members were grateful for the message. Ann Graf wrote “That was one powerful, inspiring and humbling night. They both should be at every high school in the Nation. I can’t stop thinking about it.” Lauren Barrett, Booster Club copresident, thought this is a good time for parents to talk to their kids about calling them for help if they or their friend needs it. Jim Amen, MHS Athletic Director praised them: “The presentation was extremely powerful and impactful to those that attended. You could not hear a pin drop the entire presentation. I wish that all of our students, teachers, coaches and parents would have had the opportunity to listen to these dynamic speakers.”