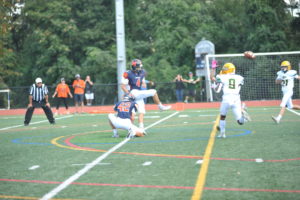 After spotting the home team a 7-0 lead in the first quarter, the Indians found the end zone twice in the second, with quarterback Matt Cargiulo scoring from 8 and 1 yards. Cargiulo added two more scores from the 1 in the second half and Jack Peterson made three of his four point-after-touchdown attempts to complete the scoring.

Will Cargiulo paced the running attack with 113 yards on seven carries while his signal-calling brother Matt added 72 yards on nine attempts. Aidan Haggerty contributed with 66 yards on five carries.

On defense, Patrick Leder was credited with a sack and Jack Mulholland had nine tackles as the Indians improved to 1-2.

Lynbrook ruined Manhasset’s Homecoming with a 48-27 win on Sept. 18. It was obvious that this was a different Owls squad that Manhasset had blitzed 37-0 during its spring championship season. The visitors, led by quarterback Matt Fagan, rushed for 478 yards as their running schemes flummoxed the Indians’ defense.